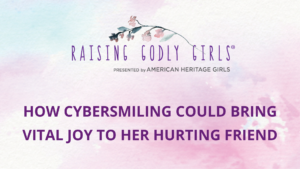 Cyberbullying is increasingly common among children under 18. Search engine data shows the volume of worldwide searches for “cyberbullying” has increased three-fold since 2004, with the majority of searches occurring during the school year.

In the age of virtual learning, there is an even greater opportunity for cyberbullying to occur. Remind your daughter that just like bullying in school, she should report cyberbullying to an adult when she sees it. Then, she can counter-act the bullying by offering support and encouragement to the student being bullied—researchers have called this digital affirmation “cybersmiling”.

One of God’s greatest commandments was to love one another—“cybersmiling” is just one way to show love to our neighbor in the midst of difficulty!