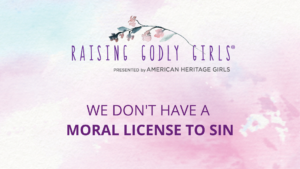 “Moral Licensing” is a term researchers use to describe a rather shocking phenomenon in the study of human morality. In basic terms, this term describes how people tend to justify their bad behavior based on the fact that they had good behavior previously.

First Peter reminds us: “Since it is written, “Be holy, because I am holy.” God calls us to a life of holiness. So is it okay to knowingly sin just because we went to church yesterday? Of course not!

Does your girl realize that striving for sanctification is an ongoing, lifelong process? That we’re never “licensed” to carry out sin, even if we’re living an otherwise holy life? It’s true, humans are inherently sinful beings, but as Christians we are called to more!